Off to the IT fashion doll convention in Orlando on Monday. I sometimes wonder if I’m quite sane travelling to the other side of the planet for just a week for fashion dolls, but the theme of ‘Fairytale Fashion’ was irresistible.  I’m also taking two OOAK competition dolls but who knows?  I read the original versions of Grimm’s fairytales as a kid, and as struck by the insanity, violence and miserable lives some kids had to endure.  The only ‘fairytale’ thing about some of these stories was some kind of supernatural intervention and/or justice in the end.  I think as a result my competition entries look a bit angry and sad, so that’ll put people off – oh well.  I’ll put the comp entries up after the convention.

Here are the five OOAKs, one with an Integrity Toys dress, that I’m taking with me, hopefully to sell with Denise Travers, who will have her sales room there.

Integrity Toys doll:  Vanessa ‘In Bloom’, my repaint.
Late 18th century style dress in vintage Thai silk, silk underskirt.  The basket is made from vintage French millinery straw.  The hat is from another IT convention a few years ago.  I have always had mixed feelings about this style of dress.  It was romantic and feminine, but it was also expensive, impractical, restricting of movement, and represents some of the worst excesses of the European aristocracy.   Fortunately, the dolls don’t care.

Integrity Toys doll:  Imogen ‘City Girl’ – my repaint.
Mid 18th century Scottish style dress, although this tartan did not come into being until much later with the Black Watch, but I couldn’t find any silk in Flora MacDonald’s tartan (some of my ancestors are also from the Isle of Skye).  I was looking at Scottish fashion around the time of the battle of Culloden.  The white rose in the beret was a symbol for the Jacobites, and not for the last time clothes became part of political resistance and identity.  Silk skirt and wrap with fine Indian lawn shirt, black cotton vest. 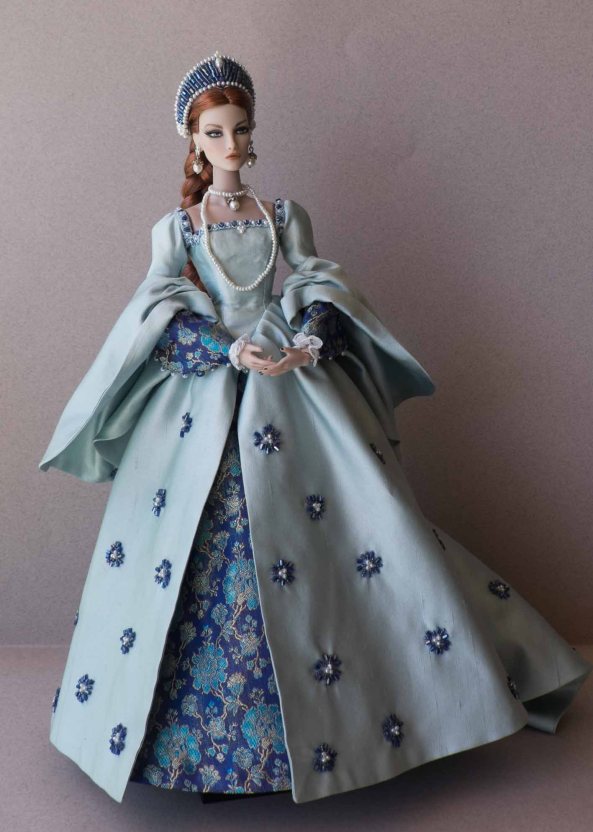 Integrity Toys Doll:  Elise – my repaint.  She has also had a new hair job in synthetic mohair so I don’t know which Elise.
Early 16th C silk dress.  Sky blue vintage silk satin embroidered with glass beads and freshwater pearls, with an underskirt in Indian silk brocade.  She vaguely reminded me of Elizabeth I, and the dress style is from around 1540s, although I think Elizabeth I would have had a great many more pearls on her dress.

More after the IT convention, which is going to be heaps of fun!